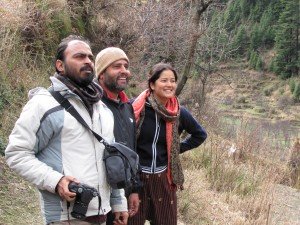 Ashwini (left) in the field with local researchers

Ashwini, a long-time IFRI researcher, has contributed to both the growth and streamlining of the IFRI data collection protocols. In 1999, he became involved with IFRI, particularly as part of identifying a smaller set of priority variables from the larger dataset. He also worked with Arun Agrawal to pilot the household format in India during 2004, which eventually became the most recent IFRI instrument. In addition, he analyzes the global IFRI dataset, in collaboration with Arun Agrawal and Lauren Persha, and published papers based on IFRI data in two of the top journals in the world – Science and PNAS. Ashwini says what he enjoys most about his involvement with IFRI is the “opportunity to interact with a very diverse and interesting set of scholars from across the world, many of whom are some of the smartest people working on issues related to forest commons in human-dominated landscapes.”

His research interests are broadly centered on the dynamic cross-scale interactions between democratization, economic development, and environmental governance. Some on ongoing research projects include 1) long-term political dynamics of redistributive land reforms and their impact on social, economic, and ecological outcomes at multiple scales, 2) the conceptualization of democracy as the emergent property of complex adaptive networks of public, civic, and market institutions, and its implications for vulnerability and adaptation to climate change 3) institutional drivers of trade-offs and synergies between livelihood benefits, carbon sequestration, and biodiversity conservation in human-dominated landscapes, and 4) impact of environmental decentralization on individual attitudes towards the environment. All of his fieldwork is located in India, but he has collaborated on projects located in Tanzania, Mexico, Guatemala and Nepal, and regularly uses the IFRI global dataset in his research.

Ashwini’s background includes training in Economics and Political Science, and a long-standing engagement with scholarship in Geography, Anthropology, Landscape Ecology, and Environmental History ensuring that his research is never confined to a single discipline. He received his undergraduate degree in Economics from the University of Delhi (1987-90) and a Ph.D. in Political Science from Duke University (2001-2006). In between, he spent 11 years working with local communities and social movements on democratic governance of natural resources in India. During 2006-07, he was the Giorgio Ruffolo Post-doctoral Fellow in Sustainability Science, Harvard University.

Click here to read about all our featured researchers.